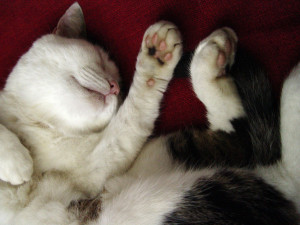 The cooler weather is here, and the leaves are starting to fall; it must be almost time for the kids to start dressing up in silly costumes and begging for candy!
Speaking of candy, it has become a tradition for adults to go through their children’s candy to ensure its safety. Perhaps, at the same time they confiscate their favorite candy for their own. Don’t do it! Along with that candy are empty carbs, sugar and calories, which can derail the excellent progress that you have made on the Go Figure Weight Loss Program!

One tip that may help you regulate you and the children’s candy consumption would be to keep the candy on a top shelf of a cupboard in the kitchen. Out of sight, out of mind!

Negative Effects of Sleep Loss and its Impact on Weight Loss

Ahhh, sleep: It is essential to our body functioning properly. However, if you have ever suffered from a sleepless night or two, you know it is not always simple to get a good night’s rest. For some of us, sleep is an elusive element to our lives that we covet and chase after night after night. For others, sleep is something that comes easily without much effort.

How much sleep do we need to stay healthy?

The amount of sleep needed is largely dependent upon the individual, including genetic factors. According to researchers, there are at least two components associated with sleep to consider: basal sleep need and sleep debt.

Basal sleep need is the amount of sleep to be able to function at our best and varies with individuals; according to The National Sleep Foundation the average adult needs between 7-9 hours of basal sleep each night.

Sleep debt is the total sleep lost due to illness, sleep environment, or lack of healthy sleep habits. Studies have shown if you are in too much of a sleep debt, you can be adversely affected in cognitive ability and can struggle with your mood.

The sleep that you need each night will be based on the amount of sleep that you’re deprived. This means if you get the recommended basal sleep needed one night, but had 2 prior nights of restless sleep, you’re in sleep debt. You may still struggle with an excessive lack of alertness and sleepiness, especially during the dips in our natural sleep/wake cycle known as circadian rhythm. (I.e. before bed and before waking.)

How does this affect weight gain?

There are at least two theories that are supported through research:

One is that scientists have found a lack of sleep increases two hormones in a small part of the brain called the hypothalamus, affecting hunger and satiety levels, which may cause people to overeat and result in weight gain. These two hormones are leptin and ghrelin.

In one recent study on sleep deprivation by the Research Laboratory on Sleep, Chronobiology and Neuroendocrinology at the University of Chicago School of Medicine, 12 subjects came into the lab to sleep and eat breakfast and dinner. When the subjects were limited to just 4 hours of sleep each night, the average leptin levels were 18% lower, and ghrelin levels were 28% higher than they were prior to beginning the study. The subjects with the greatest change in these two levels also were the most hungry and craved carbohydrate-rich foods.

According to one study, just one night of sleep deprivation can cause insulin resistance in healthy individuals. Insulin resistance is when your body’s muscle, liver, and fat cells are restricted in the amount of glucose (blood sugar) they are able to take in due to the reduced sensitivity to insulin. Insulin is a hormone produced in the pancreas which is essential for the uptake of glucose into cells. Your body registers that there are low levels of insulin available, and signals to the pancreas to produce more to allow for the uptake of glucose into cells. When the pancreas cannot produce any further, there is a build-up of blood glucose in the bloodstream. When there is elevated glucose in the bloodstream you are considered prediabetic resulting in excess weight around the midsection, and abnormal levels of cholesterol and triglycerides in the blood.

Interestingly enough, after a few nights of being sleep deprived, people can have elevated glucose levels because of a reduced ability in glucose metabolism pathways. Studies have shown after a high-carbohydrate meal it may take 40% longer to metabolize than normal. This, paired with our knowledge of how we crave high-carbohydrate foods after a restless night’s sleep, is a recipe for disaster.

What can you do to sleep better?

Some important factors for adequate rest are to create an environment that promotes sleep. Here are some tips to help you make your space conducive to rest:

I had gone up and down in weight for many, many years and I really needed to lose weight and keep it off. The program was easy to follow, and the Go Figure staff was so helpful and supportive in helping me to lose 110 pounds! I find I enjoy my new and improved eating habits and look forward to better health and more energy! *Actual client. Results may vary based on client participation

I had tried diets of all types for several years, some worked, and some didn’t.  After seeing the ads in the Bozeman Chronicle and the people’s stories of how they lost weight, I decided to give the program a try.  My experience with Go Figure has been very good; the staff is helpful and informative.  Since starting the program, my health has improved immensely. I have more energy, lower blood pressure and best of all, my self-confidence is back! *Actual client. Results may vary based on client participation

A friend of mine joined the program and immediately had nothing but praise for Go Figure. It was a no brainer for me to join. The easy to-follow diet changed my lifestyle, but the people at Go Figure are what kept me going. The staff and their encouragement got me to my goal weight. Now that I reached my goal, the compliments are flooding in! I feel healthier, happier and ready for life! *Actual client. Results may vary based on client participation

The staff at Go Figure was one of the biggest factors in my weight loss. Other programs throw booklets and pamphlets at you, but at Go Figure I had one-on-one time each week to ask any questions I had (and I had a lot!). Each week, as the pounds came off, the staff celebrated with me and provided encouragement.  I went from wearing size 44 pants to size 32. I’ve been wearing my son’s clothing! *Actual client. Results may vary based on client participation

After college I started working a full time desk job. I found myself eating more, exercising less and the pounds just crept up on me over the years. I wanted to join a program that would help me stick to a plan. I found the program to be easy to stick with, and the gals I worked with were always so encouraging and helpful. Thank you Go Figure! *Actual client. Results may vary based on client participation

I came to Go Figure because I was tired of looking at myself and everyone else looking at me. I was very unhappy with the way I felt and looked. Other diets in the past didn’t work for me like Go Figure did. I wanted to be healthy for my husband and kids. I needed a lifestyle change which is why I came to Go Figure. Now, my overall health has improved and I have much more energy! *Actual client. Results may vary based on client participation

I came to Go Figure because I knew that I was overweight and that I was unhappy. Within the first few weeks I was really happy with the results and emotionally I felt really good. Now that I’ve reached my goal weight I feel much better and healthier. *Actual client. Results may vary based on client participation

At 368 pounds and borderline diabetic, my doctor suggested bypass or lap band surgery. I was 65, had at least 100 pounds to lose and arthritic knees. I lost about 30lbs. in 6 months on my own, but it was very up and down. Then I followed Go Figure’s plan and lost over 100lbs! I’ve gone from pant size 52 to 38, and size 4XL to L. I can now mow the yard and do many things I could never do at my previous weight. I am now on maintenance to keep the weight from ever coming back. *Actual client. Results may vary based on client participation

I was severely overweight, and had to go to the ER after a hunting trip. I was ghost white and could hardly breathe. My fiancée and I started the program together, and we both lost a lot of weight. My work has gotten easier due to the weight loss. I have really enjoyed hiking and hunting this Fall, and no longer get winded while climbing the hills. I feel like a new person! *Actual client. Results may vary based on client participation

The program is great; it really teaches you a new lifestyle! It really was not hard to make the changes. My only difficulty was at the beginning when learning what to look for in the foods we eat. Now it’s just normal for me. The best part for me is being able to walk any distance and still be able to breathe! *Actual client. Results may vary based on client participation

...and learn how we can help you unlock the healthiest you.